What is the definition of Peptic Ulcer?

A peptic ulcer is an open sore or raw area in the lining of the stomach or intestine.

There are two types of peptic ulcers: 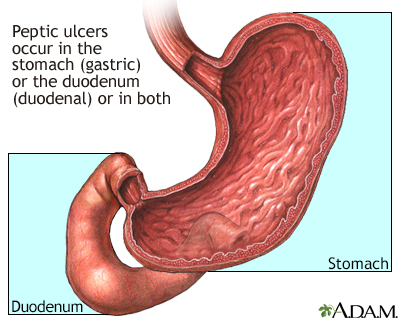 What are the alternative names for Peptic Ulcer?

What are the causes for Peptic Ulcer?

Normally, the lining of the stomach and small intestines can protect itself against strong stomach acids. But if the lining breaks down, the result may be:

Most ulcers occur in the first layer of the inner lining. A hole in the stomach or duodenum is called a perforation. This is a medical emergency. 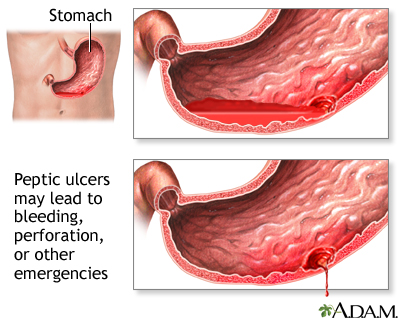 The following factors raise your risk for peptic ulcers: 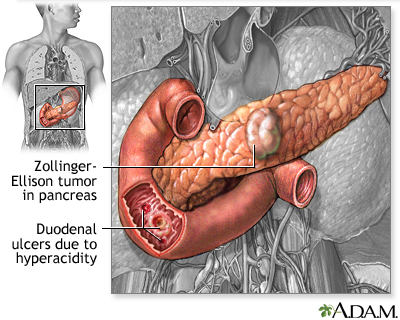 What are the symptoms for Peptic Ulcer?

Small ulcers may not cause any symptoms. Some ulcers can cause serious bleeding.

Abdominal pain (often in the upper mid-abdomen) is a common symptom. The pain can differ from person to person. Some people have no pain.

What are the current treatments for Peptic Ulcer?

Your health care provider will recommend medicines to heal your ulcer and prevent a relapse. The medicines will:

Take all of your medicines as you have been told. Other changes in your lifestyle can also help.

If you have a peptic ulcer with an H pylori infection, the standard treatment uses different combinations of the following medicines for 7 to 14 days:

You will likely need to take a PPI for 8 weeks if:

Your provider may also prescribe this type of medicine regularly if you continue taking aspirin or NSAIDs for other health conditions.

Other medicines used for ulcers are:

Surgery may be needed if:

What is the outlook (prognosis) for Peptic Ulcer?

Peptic ulcers tend to come back if untreated. There is a good chance that the H pylori infection will be cured if you take your medicines and follow your provider's advice. You will be much less likely to get another ulcer.

What are the possible complications for Peptic Ulcer?

When should I contact a medical professional for Peptic Ulcer?

Get medical help right away if you:

How do I prevent Peptic Ulcer?

Avoid aspirin, ibuprofen, naproxen, and other NSAIDs. Try acetaminophen instead. If you must take such medicines, talk to your provider first. Your provider may: 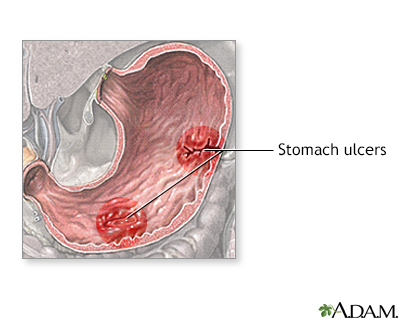 This review of the literature assessed the safety and outcomes of Roux-en-Y versus Billroth-I reconstruction after distal gastrectomy in the treatment of patients with gastric cancer.
This case report describes a 70-year-old man with multiple liver metastases from remnant gastric cancer treated with chemotherapy, S-1, and surgery.
View All Latest Advances