What is the definition of Sepsis?

Sepsis is an illness in which the body has a severe, inflammatory response to bacteria or other germs.

What are the alternative names for Sepsis?

What are the causes for Sepsis?

The symptoms of sepsis are not caused by the germs themselves. Instead, chemicals the body releases cause the response.

A bacterial infection anywhere in the body may set off the response that leads to sepsis. Common places where an infection might start include the:

For people in the hospital, common sites of infection include intravenous lines, surgical wounds, surgical drains, and sites of skin breakdown, known as bedsores or pressure ulcers.

What are the symptoms for Sepsis?

A change in mental status and very fast breathing may be the earliest signs of sepsis.

In general, symptoms of sepsis can include:

What are the current treatments for Sepsis?

A person with sepsis will be admitted to a hospital, usually in the intensive care unit (ICU). Antibiotics are usually given through a vein (intravenously).

Other medical treatments include:

What is the outlook (prognosis) for Sepsis?

Sepsis is often life threatening, especially in people with a weak immune system or a long-term (chronic) illness.

Damage caused by a decrease in blood flow to vital organs such as the brain, heart, and kidneys may take time to improve. There may be long-term problems with these organs.

How do I prevent Sepsis?

The risk of sepsis can be reduced by getting all recommended vaccines. 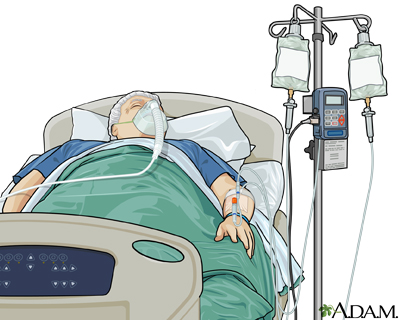 This case report describes a patient with extensive distal muscle secondary necrosis due to high level crush injury of the upper thighs treated with remedial repair.
This study analyzed the effectiveness of various surgical approaches for the treatment of patients with complicated pancreatic pseudocysts.
View All Latest Advances