LoginSign Up
Are we missing a condition or feature you’d like to see? MediFind is always evolving and we’d love your feedback.
Submit Feedback 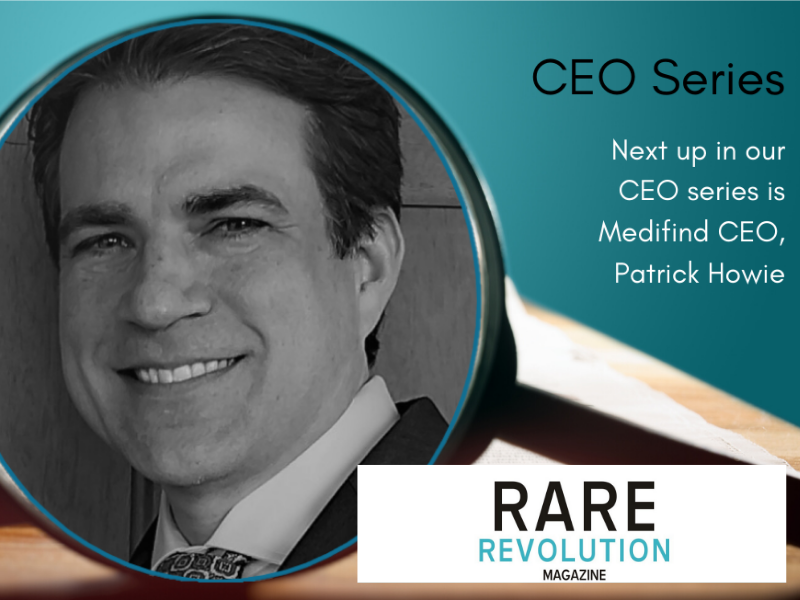 Patrick Howie, CEO of MediFind, knows all too well the challenges patients can face in trying to obtain the right care and learn about new treatment options. Motivated by personal experience, he founded MediFind, to try and ensure precious time isn’t wasted; by helping patients find the expertise and treatments they need, faster.

1. What made you want to move into the wide world of rare disease, and then specifically MediFind and what did that journey look like?

I was at brunch with my brother, Dennis, who had been fighting a rare cancer for four years at that point, when he said, “I’m running out of options, any ideas?” I literally couldn’t breathe for a minute. I also knew that I had to come up with some ideas. While I’m not a doctor, as the head of Global Analytics for one of the largest pharmaceutical companies in the world, I did have access to unparalleled data capabilities and an intricate understanding of the world of healthcare. I realised then that he had lost a lot of time trying to find experts and trying to learn about new treatment options, and that I could leverage analytics to help him, and patients like him, find better care, faster. That’s how MediFind was born.

2. What do you anticipate will be the biggest challenges and opportunities for your organisation in the next two years?

​Our biggest challenge will be to make sure everything we do is easily understood by patients and their caregivers. Healthcare can be extremely complex, especially the terminology. We are working very hard to translate this complex medical terminology so patients can more easily understand and act on it. Many patients want to be more actively involved in their treatment decisions, and once the medical jargon is removed, they will better be able to use their voice to get the care they need.

3. What is your proudest moment in your career thus far?​

As we started to build out MediFind, an American colleague of mine heard about what I was doing and asked for help. His son had some significant health issues from birth and was being treated at one of the medical centres considered to be a world leader in his condition. They were recommending his son start a treatment, but the father wanted a second opinion. I pointed him to some experts in Europe, who willingly reviewed his son’s history and records, and told the father that the treatment being recommended had recently been shown to not work. The European doctors consulted with the local doctors to come up with a different treatment plan that is dramatically better than the original plan.

4. What and who are your personal and professional inspirations and why?

Obviously my original inspiration was my brother, but I am now inspired by the millions of people like him around the world who tackle their medical situations head on and are looking for a better way. Everyone deserves the best chances at the best health.

5. What advice would you give someone considering working in the rare disease space?

​In my opinion, passion and persistence are requirements to working in the rare disease space. Tackling a rare disease is particularly challenging because it is hard to get enough critical mass to really drive progress for any single rare disease. The good news is that the rare disease communities are extremely passionate and frequently have an impact much bigger than their numbers would indicate.

6. Do you think the government does enough for the rare disease community at a local and central level, and what gaps do you see currently or emerging?

Given that I am based in the United States of America, our approach is obviously quite different from much of the world. While every government faces a situation where there are more demands on resources than can be fully met, I do believe governments are missing out on a big opportunity to help rare disease patients (and, quite frankly, all patients) by not investing in maximising the impact of generic medications. There are thousands of generic medications that alone, or in combination, might be able to help rare disease patients but there is no economic incentive for private companies to explore those options. A government program to maximise the impact of these low-cost treatments could have a huge impact to patients and could reduce costs to the system.

7. What would you say are some of the biggest motivators for your employees?

Just about every one of our employees has a friend or family member who has struggled with a rare disease. For them, the motivation is easy, as they understand the impact we can make. For those that don’t have that direct connection, I believe they all understand the greater human impact we can have, even if it isn’t as personal for them. We are also solving some pretty tough challenges, so many get an added motivational boost from working on difficult problems.

8. What are the toughest parts of being a CEO, and conversely what are the most rewarding?

The most difficult part for me is having to spend more time than I would like on operational tasks.  I know they are needed, which is why I do them, but I want to spend as much time as I can trying to solve those problems that will help the most patients.

9. What would be your one wish for MediFind for the year ahead?

​I want to release the first complete and constantly updated list of treatments for every rare disease. I believe that one of the greatest opportunities we have in the near term is to learn from the experience of others and which treatments, or combinations of treatments, have helped patients with a specific disease or condition related to a disease. This information is hard to get, and difficult to synthesize, and we have been working for the past three years to develop a system to capture this information in a comprehensive and ongoing way. This is related to the notion of medication repurposing—many doctors are having success using combinations of readily available treatments to treat rare disease but it is hard to find out what has been tried and what is working (or not).

​The truth is that I didn’t seek out this job, but I knew that there was an important need that we could uniquely solve. My 10-year-old self was blissfully ignorant of rare diseases and I didn’t have a personal connection to them until my 40s, but helping patients with rare diseases has become my life’s mission.

Tags: In The NewsRare Disease

See More in the Newsroom