What is the definition of Amaurosis Fugax?

Amaurosis fugax is a temporary loss of vision in one or both eyes due to a lack of blood flow to the retina. The retina is the light-sensitive layer of tissue at the back of the eyeball.

What are the alternative names for Amaurosis Fugax?

What are the causes for Amaurosis Fugax?

Plaque is a hard substance that forms when fat, cholesterol, and other substances build up in the walls of arteries. Risk factors include:

Amaurosis fugax can also occur because of other disorders such as:

What are the symptoms for Amaurosis Fugax?

Symptoms include the sudden loss of vision in one or both eyes. This usually lasts for a few seconds to several minutes. Afterward, vision returns to normal. Some people describe the loss of vision as a gray or black shade coming down over the eye.

What are the current treatments for Amaurosis Fugax?

Your doctor may also recommend:

If a large part of the carotid artery appears blocked, carotid endarterectomy surgery is done to remove the blockage. The decision to do surgery is also based on your overall health.

What is the outlook (prognosis) for Amaurosis Fugax?

When should I contact a medical professional for Amaurosis Fugax?

Call your provider if any vision loss occurs. If symptoms last longer than a few minutes or if there are other symptoms with the vision loss, seek medical attention right away. 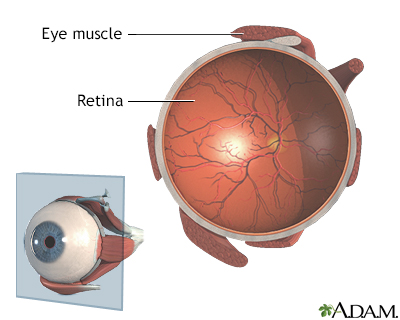 In this study, researchers evaluated the outcomes of using a foldable non-penetrating keratoprosthesis for the treatment of corneal blindness due to noninflammatory anterior cornea disease.
The study researched the outcomes of cytoreductive surgery?+?hyperthermic intraperitoneal chemotherapy combined with intraperitoneal?+intravenous chemotherapy for gastric signet-ring cell carcinoma.
View All Latest Advances