What is the definition of Brain Aneurysm?

What are the alternative names for Brain Aneurysm?

What are the causes for Brain Aneurysm?

Aneurysms in the brain occur when there is a weakened area in the wall of a blood vessel. An aneurysm may be present from birth (congenital). Or, it may develop later in life.

There are many types of brain aneurysms. The most common type is called a berry aneurysm. This type can vary in size from a few millimeters to over a centimeter. Giant berry aneurysms can be bigger than 2.5 centimeters. These are more common in adults. Berry aneurysms, especially when there is more than one, are sometimes passed down through families.

Brain aneurysms are common. One in fifty people has a brain aneurysm, but only a small number of these aneurysms cause symptoms or rupture.

What are the symptoms for Brain Aneurysm?

A person may have an aneurysm without having any symptoms. This kind of aneurysm may be found when an MRI or CT scan of the brain is done for another reason.

A brain aneurysm may begin to leak a small amount of blood. This may cause a severe headache that a person may describe as "the worst headache of my life." It may be called a thunderclap or sentinel headache. This means the headache could be a warning sign of a future rupture that may occur days to weeks after the headache first started.

Symptoms may also occur if the aneurysm pushes on nearby structures in the brain or breaks open (ruptures) and causes bleeding into the brain.

Symptoms depend on the location of the aneurysm, whether it breaks open, and what part of the brain it is pushing on. Symptoms may include:

NOTE: A ruptured aneurysm is a medical emergency. Call 911 or your local emergency number.

What are the current treatments for Brain Aneurysm?

Two common methods are used to repair an aneurysm.

Not all aneurysms need to be treated right away. Those that are very small (less than 3 mm) are less likely to break open.

A ruptured aneurysm is an emergency that needs to be treated right away. Treatment may involve:

Once the aneurysm is repaired, treatment may be needed to prevent a stroke from a blood vessel spasm.

What is the outlook (prognosis) for Brain Aneurysm?

How well you do depends on many things. People who are in a deep coma after an aneurysm rupture do not do as well as those with less severe symptoms.

Ruptured cerebral aneurysms are often deadly. Of those who survive, some have no permanent disability. Others have moderate to severe disability.

What are the possible complications for Brain Aneurysm?

Complications of aneurysm in the brain may include:

When should I contact a medical professional for Brain Aneurysm?

Go to the emergency room or call 911 or your local emergency number if you have a sudden or severe headache, especially if you also have nausea, vomiting, seizures, or any other nervous system symptom.

Also call if you have a headache that is unusual for you, especially if it is severe or your worst headache ever.

How do I prevent Brain Aneurysm?

There is no known way to prevent a berry aneurysm from forming. Treating high blood pressure may reduce the chance that an existing aneurysm will rupture. Controlling risk factors for atherosclerosis may reduce the likelihood of some types of aneurysms.

People who are known to have an aneurysm may need regular doctor visits to make sure the aneurysm is not changing size or shape.

If unruptured aneurysms are discovered in time, they can be treated before causing problems or monitored with regular imaging (usually yearly).

The decision to repair an unruptured cerebral aneurysm is based on the size and location of the aneurysm, and the person's age and general health. 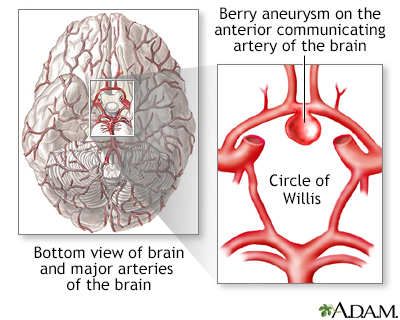 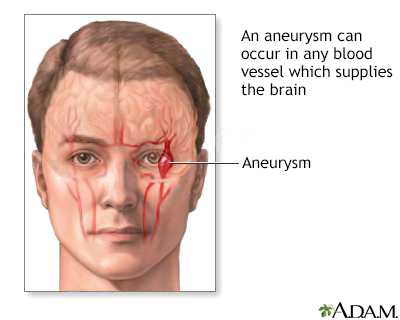 This case report describes a pregnant (with twins) patient that experienced an intracranial aneurysm.
This article reviewed 2 cases of headache after endovascular treatment (used to treat problems affecting the blood vessels) of intracranial aneurysm (abnormal bulge or ballooning in the wall of a blood vessel in the brain) treated with ultrasound-guided bilateral greater occipital nerve block (procedure that involves injecting pain-relieving medication and steroids into the greater and lesser occipital nerves).
View All Latest Advances