Learn About Breast Enlargement In Males

What is the definition of Breast Enlargement In Males?

When abnormal breast tissue develops in males, it is called gynecomastia. It is important to find out if the excess growth is breast tissue and not excess fat tissue (lipomastia).

Save information for later
Sign Up
What are the alternative names for Breast Enlargement In Males?

Gynecomastia; Breast enlargement in a male

What is some background information about Breast Enlargement In Males?

The condition may occur in one or both breasts. It begins as a small lump beneath the nipple, which may be tender. One breast may be larger than the other. Over time the lump may become less tender and feel harder.

Enlarged breasts in males are usually harmless, but may cause men to avoid wearing certain clothing or to not want to be seen without a shirt. This can cause significant distress, particularly in young men.

Some newborns may have breast development along with a milky discharge (galactorrhea). This condition usually lasts for a couple of weeks to months. In rare cases, it may last until the child is 1 year old.

What are the causes of Breast Enlargement In Males?

Normal hormone changes are the most common cause of breast development in newborns, boys, and men. There are other causes as well.

Breast enlargement is usually caused by an imbalance of estrogen (female hormone) and testosterone (male hormone). Males have both types of hormones in their body. Changes in the levels of these hormones, or in how the body uses or responds to these hormones, can cause enlarged breasts in males.

In newborns, breast growth is caused by being exposed to estrogen from the mother. About one half of boy babies are born with enlarged breasts, called breast buds. They usually go away in 2 to 6 months, but can last longer.

In preteens and teens, breast growth is caused by normal hormone changes that occur in puberty. More than one half of boys develop some breast enlargement during puberty. Breast growth often goes away in about 6 months to 2 years.

In men, hormone changes due to aging can cause breast growth. This may occur more often in overweight or obese men and in men age 50 and older.

Certain health problems can cause breast growth in adult men, including:

Some medicines and treatments that can cause breast growth in men include:

DRUG AND ALCOHOL USE

Gynecomastia has also been linked to exposure to endocrine disrupters. These are common chemicals often found in plastics.

How do I perform a home exam for a Breast Enlargement In Males?

For swollen breasts that are tender, applying cold compresses may help. Ask your health care provider if it's OK to take pain relievers.

When should I contact a medical professional for Breast Enlargement In Males?

If your son has breast growth but has not yet reached puberty, have it checked by a provider.

Your provider will take a medical history and perform a physical examination.

You may not need any tests, but the following tests may be done to rule out certain diseases:

Often no treatment is needed. Breast growth in newborns and young boys often goes away on its own.

If a medical condition is causing the problem, your provider will treat that condition.

Your provider will talk with you about medicines or substances that may cause breast growth. Stopping their use or changing medicines will make the problem go away. DO NOT stop taking any medicines before talking to your provider.

Breast growth that is large, uneven, or does not go away may cause a decrease in quality of life. Treatments that may be used in this situation are:

Gynecomastia that has been present for a long time is less likely to resolve even if the right treatment is started. 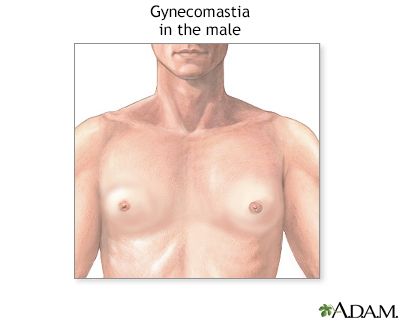 Who are the top Breast Enlargement In Males Local Doctors?
AI
Alessandro A. Innocenti
Elite
Highly rated in
8
conditions

Charles Sultan practices in Montpellier, France. Sultan is rated as an Elite expert by MediFind in the treatment of Breast Enlargement In Males. He is also highly rated in 20 other conditions, according to our data. His top areas of expertise are Hypospadias, Intersex, Partial Androgen Insensitivity Syndrome (PAIS), Oophorectomy, and Hormone Replacement Therapy (HRT).

Match to trials
Find the right clinical trials for you in under a minute
Get started
A Pilot Study of Revian Red All LED Cap as a Novel Treatment for Central Centrifugal Cicatricial Alopecia.
Enrollment Status: Recruiting
Publish Date: July 27, 2022
Intervention Type: Device
Study Phase: Not Applicable

Summary: Central centrifugal cicatricial alopecia (CCCA) is form of scarring hair loss that predominately affects middle-aged women of African descent.1 . Clinically, the natural progression of CCCA starts at the crown as roughly circular scarred patches, which evolve into scarred areas increasing in size circumferentially. Characteristically, the scar is often smooth and shiny, and the hair density in the...