What is the definition of Bulging Fontanelles?

A bulging fontanelle is an outward curving of an infant's soft spot (fontanelle).

Save information for later
Sign Up
What are the alternative names for Bulging Fontanelles?

What is some background information about Bulging Fontanelles?

The skull is made up of many bones, 8 in the skull itself and 14 in the face area. They join together to form a solid, bony cavity that protects and supports the brain. The areas where the bones join together are called the sutures.

The bones are not joined together firmly at birth. This allows the head to change shape to help it pass through the birth canal. The sutures get minerals added to them over time and harden, firmly joining the skull bones together.

In an infant, the space where 2 sutures join forms a membrane-covered "soft spot" called a fontanelle (fontanel). The fontanelles allow for growth of the brain and skull during an infant's first year.

There are normally several fontanelles on a newborn's skull. They are located mainly at the top, back, and sides of the head. Like the sutures, fontanelles harden over time and become closed, solid bony areas.

The fontanelles should feel firm and very slightly curved inward to the touch. A tense or bulging fontanelle occurs when fluid builds up in the brain or the brain swells, causing increased pressure inside the skull.

What are the causes of Bulging Fontanelles?

Reasons a child may have bulging fontanelles include:

How do I perform a home exam for a Bulging Fontanelles?

If the fontanelle returns to normal appearance when the child is calm and head-up, it is not a truly bulging fontanelle.

When should I contact a medical professional for Bulging Fontanelles?

Immediate, emergency care is needed for any infant who has a truly bulging fontanelle, especially if it occurs along with fever or excess drowsiness.

The health care provider will perform a physical exam and ask questions about the child's medical history, such as:

Diagnostic tests that may be done are: 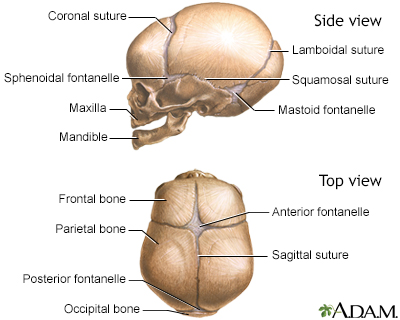 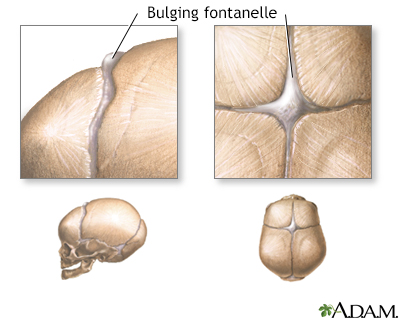 Zulfiqar Bhutta practices in Karachi, Pakistan. Bhutta is rated as a Distinguished expert by MediFind in the treatment of Bulging Fontanelles. They are also highly rated in 40 other conditions, according to our data. Their top areas of expertise are Malnutrition, Eclampsia, Diarrhea, Bone Marrow Transplant, and Liver Transplant.

Lorena Galindo-Monge practices in Zaragoza, Spain. Galindo-Monge is rated as a Distinguished expert by MediFind in the treatment of Bulging Fontanelles. She is also highly rated in 2 other conditions, according to our data. Her top areas of expertise are Bulging Fontanelles, Tolosa Hunt Syndrome, Increased Intracranial Pressure, and Fetal Enterovirus Syndrome.

Jose Segura-Pena practices in Zaragoza, Spain. Segura-Pena is rated as a Distinguished expert by MediFind in the treatment of Bulging Fontanelles. He is also highly rated in 2 other conditions, according to our data. His top areas of expertise are Bulging Fontanelles, Epilepsy in Children, Spastic Diplegia Infantile Type, and Fetal Enterovirus Syndrome.

Who are the sources who wrote this article ?