What is the definition of Creutzfeldt-Jakob Disease?

Creutzfeldt-Jakob disease (CJD) is a form of brain damage that leads to a rapid decrease in movement and loss of mental function.

What are the alternative names for Creutzfeldt-Jakob Disease?

What are the causes for Creutzfeldt-Jakob Disease?

CJD is caused by a protein called a prion. A prion causes normal proteins to fold abnormally. This affects other proteins' ability to function.

CJD is very rare. There are several types. The classic types of CJD are:

Variant CJD is caused by eating infected meat. The infection that causes the disease in cows is believed to be the same one that causes vCJD in humans.

Variant CJD causes less than 1 percent of all CJD cases. It tends to affect younger people. Fewer than 200 people worldwide have had this disease. Almost all cases occurred in England and France.

CJD may be related to several other diseases caused by prions, including:

What are the symptoms for Creutzfeldt-Jakob Disease?

CJD symptoms may include any of the following:

What are the current treatments for Creutzfeldt-Jakob Disease?

There is no known cure for this condition. Different medicines have been tried to slow the disease. These include antibiotics, drugs for epilepsy, blood thinners, antidepressants, and interferon. But none works well.

The goal of treatment is to provide a safe environment, control aggressive or agitated behavior, and meet the person's needs. This may require monitoring and assistance in the home or in a care facility. Family counseling may help the family cope with the changes needed for home care.

People with this condition may need help controlling unacceptable or dangerous behaviors. This involves rewarding positive behaviors and ignoring negative behaviors (when it is safe). They may also need help getting oriented to their surroundings. Sometimes, medicines are needed to help control aggression.

Persons with CJD and their family may need to seek legal advice early in the course of the disorder. Advance directive, power of attorney, and other legal actions can make it easier to make decisions about the care of the person with CJD.

What is the outlook (prognosis) for Creutzfeldt-Jakob Disease?

The outcome of CJD is very poor. People with sporadic CJD are unable to care for themselves within 6 months or less after symptoms begin.

The disorder is fatal in a short time, usually within 8 months. People who have variant CJD get worse more slowly, but the condition is still fatal. A few people survive for as long as 1 or 2 years. The cause of death is usually infection, heart failure, or respiratory failure.

The course of CJD is:

When should I contact a medical professional for Creutzfeldt-Jakob Disease?

CJD is not a medical emergency. However, getting diagnosed and treated early may make the symptoms easier to control, give patients time to make advance directives and prepare for the end of life, and give families extra time to come to terms with the condition.

How do I prevent Creutzfeldt-Jakob Disease?

Medical equipment that may be contaminated should be removed from service and disposed of. People known to have CJD should not donate a cornea or other body tissue.

Most countries now have strict guidelines for managing infected cows to avoid transmitting CJD to humans. 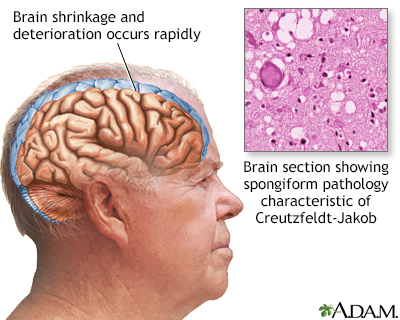 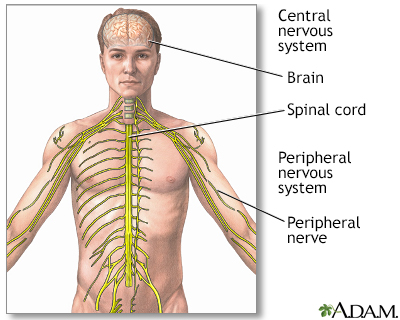