What is the definition of Esophagitis?

Esophagitis is a condition in which the lining of the esophagus becomes swollen, inflamed, or irritated. The esophagus is the tube that leads from your mouth to the stomach. It is also called the food pipe.

What are the alternative names for Esophagitis?

What are the causes for Esophagitis?

Esophagitis is often caused by stomach fluid that flows back into the food pipe. The fluid contains acid, which irritates the tissue. This problem is called gastroesophageal reflux (GERD). An autoimmune disorder called eosinophilic esophagitis also causes this condition.

The following increase your risk for this condition:

People who have a weakened immune system may develop infections. Infections may lead to swelling of the food pipe. Infection may be due to:

What are the symptoms for Esophagitis?

The infection or irritation may cause the food pipe to become inflamed. Sores called ulcers may form.

What are the current treatments for Esophagitis?

Treatment depends on the cause. Common treatment options are:

You should stop taking medicines that damage the lining of the esophagus. Take your pills with plenty of water. Avoid lying down immediately after taking the pill.

What is the outlook (prognosis) for Esophagitis?

Most of the time, the disorders that cause swelling and inflammation of the food pipe, respond to treatment.

What are the possible complications for Esophagitis?

If not treated, this condition may cause severe discomfort. Scarring (stricture) of the food pipe may develop. This can cause swallowing problems.

A condition called Barrett esophagus (BE) can develop after years of GERD. Rarely, BE may lead to cancer of the food pipe.

When should I contact a medical professional for Esophagitis?

Call your health care provider if you have: 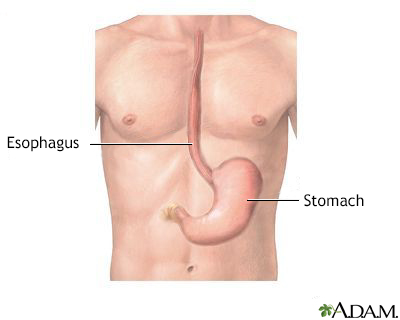 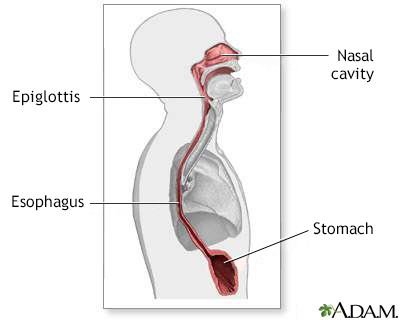 Diagnostic value and potential clinical significance of duodenal lipoma based on computed tomography imaging data.
This study evaluated the effectiveness and safety of modified Kamikawa anastomosis (surgical connection between two structures) in digestive tract reconstruction after proximal gastrectomy (surgical removal of all or part of the stomach) in patients with upper gastric carcinoma (type of stomach cancer) or esophagogastric junction carcinoma (cancer of the esophagus, the tube that connects the mouth and stomach).
View All Latest Advances