What is the definition of Giant Congenital Nevus?

A congenital pigmented or melanocytic nevus is a dark-colored, often hairy, patch of skin. It is present at birth or appears in the first year of life.

A giant congenital nevus is smaller in infants and children, but it usually continues to grow as the child grows. A giant pigmented nevus is larger than 15 inches (40 centimeters) once it stops growing.

What are the alternative names for Giant Congenital Nevus?

What are the causes for Giant Congenital Nevus?

These marks are thought to be caused by problems with melanocytes that don't spread evenly as a baby grows in the womb. Melanocytes are the skin cells that produce melanin, which gives skin its color. A nevus has an abnormally large amount of melanocytes.

The condition is thought to be caused by a gene defect.

The condition may occur with:

Smaller congenital pigmented or melanocytic nevi are common in children and do not cause problems most of the time. Larger or giant nevi are rare.

What are the symptoms for Giant Congenital Nevus?

A nevus will appear as a dark-colored patch with any of the following:

Nevi are commonly found on the upper or lower parts of the back or the abdomen. They may also be found on the:

What are the current treatments for Giant Congenital Nevus?

You will need to have regular exams to check for skin cancer.

Surgery to remove the nevus can be done for cosmetic reasons or if your provider thinks it may become skin cancer. Skin grafting is also done when needed. Larger nevi may need to be removed in several stages.

Lasers and dermabrasion (rubbing them off) can also be used to improve appearance. These treatments may not remove the whole birthmark, so it may be harder to detect skin cancer (melanoma). Talk to your doctor about the pros and cons of surgery for you.

Treatment may be helpful if the birthmark causes emotional problems because of how it looks.

What is the outlook (prognosis) for Giant Congenital Nevus?

Skin cancer may develop in some people with large or giant nevi. The cancer risk is higher for nevi that are larger in size. However, it isn't known if removing the nevus reduces that risk.

What are the possible complications for Giant Congenital Nevus?

Having a giant nevus may lead to:

When should I contact a medical professional for Giant Congenital Nevus?

This condition is usually diagnosed at birth. Talk to your child's provider if your child has a large pigmented area anywhere on their skin. 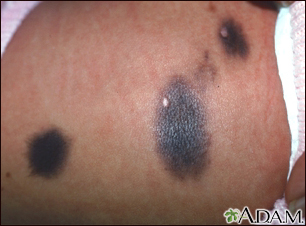