What is the definition of Hemophilia A?

Hemophilia A is a hereditary bleeding disorder caused by a lack of blood clotting factor VIII. Without enough factor VIII, the blood cannot clot properly to control bleeding.

What are the alternative names for Hemophilia A?

What are the causes for Hemophilia A?

When you bleed, a series of reactions take place in the body that helps blood clots form. This process is called the coagulation cascade. It involves special proteins called coagulation, or clotting, factors. You may have a higher chance of excess bleeding if one or more of these factors are missing or are not functioning like they should.

Factor VIII (eight) is one such coagulation factor. Hemophilia A is the result of the body not making enough factor VIII.

Males have only one X chromosome. If the factor VIII gene is missing on a boy's X chromosome, he will have hemophilia A. For this reason, most people with hemophilia A are male.

What are the symptoms for Hemophilia A?

Severity of symptoms vary. Prolonged bleeding is the main symptom. It is often first seen when an infant is circumcised. Other bleeding problems usually show up when the infant starts crawling and walking.

Mild cases may go unnoticed until later in life. Symptoms may first occur after surgery or injury. Internal bleeding may occur anywhere.

What are the current treatments for Hemophilia A?

Treatment includes replacing the missing clotting factor. You will receive factor VIII concentrates. How much you get depends on:

Mild hemophilia may be treated with desmopressin (DDAVP). This medicine helps the body release factor VIII that is stored within the lining of blood vessels.

To prevent a bleeding crisis, people with hemophilia and their families can be taught to give factor VIII concentrates at home at the first signs of bleeding. People with severe forms of the disease may need regular preventive treatment.

DDAVP or factor VIII concentrate may also be needed before having dental extractions or surgery.

You should get the hepatitis B vaccine. People with hemophilia are more likely to get hepatitis B because they may receive blood products.

Some people with hemophilia A develop antibodies to factor VIII. These antibodies are called inhibitors. The inhibitors attack factor VIII so that it no longer works. In such cases, a man-made clotting factor called VIIa can be given.

What are the support groups for Hemophilia A?

You can ease the stress of illness by joining a hemophilia support group. Sharing with others who have common experiences and problems can help you not feel alone.

What is the outlook (prognosis) for Hemophilia A?

With treatment, most people with hemophilia A are able to lead a fairly normal life.

If you have hemophilia A, you should have regular checkups with a hematologist.

What are the possible complications for Hemophilia A?

When should I contact a medical professional for Hemophilia A?

How do I prevent Hemophilia A?

Testing can be done during pregnancy on a baby in the mother's womb. 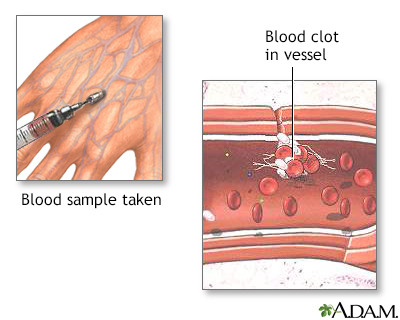 Clinical Trial
Drug
Prospective, Single-Arm, Open-Label Use of Hemlibra (Emicizumab) in the Treatment of Mild Hemophilia A
Clinical Trial
Other
Efficacy of a Physiotherapy Intervention Through Movement Visualization in Pain Management in Patients With Hemophilic Arthropathy. Randomized Multicenter Clinical Study.
View All Clinical Trials