What is the definition of Osteonecrosis?

Osteonecrosis is bone death caused by poor blood supply. It is most common in the hip and shoulder but can affect other large joints such as the knee, elbow, wrist, and ankle.

Save information for later
Sign Up
What are the alternative names for Osteonecrosis?

What are the causes of Osteonecrosis?

Osteonecrosis occurs when part of the bone does not get blood flow and dies. After a while, the bone can collapse. If osteonecrosis is not treated, the joint deteriorates, leading to severe arthritis.

Osteonecrosis can be caused by disease or by severe trauma, such as a fracture or dislocation, that affects the blood supply to the bone. Osteonecrosis can also occur without trauma or disease. This is called idiopathic -- meaning it occurs without any known cause.

The following are possible causes:

When osteonecrosis occurs in the shoulder joint, it is usually due to long-term treatment with steroids, a history of trauma to the shoulder, or the person has sickle cell disease.

What are the symptoms of Osteonecrosis?

There are no symptoms in the early stages. As bone damage worsens, you may have the following symptoms:

Not sure about your diagnosis?
Check Your Symptoms
What are the current treatments for Osteonecrosis?

If your provider knows the cause of osteonecrosis, part of the treatment will be aimed at the underlying condition. For example, if a blood clotting disorder is the cause, treatment will consist, in part, of clot-dissolving medicine.

If the condition is caught early, you will take pain relievers and limit use of the affected area. This may include using crutches if your hip, knee, or ankle is affected. You may need to do range-of-motion exercises. Nonsurgical treatment can often slow the progression of osteonecrosis, but most people will need surgery.

Michael Mont is an Orthopedics expert in New York, New York. Mont has been practicing medicine for over 39 years and is rated as an Elite expert by MediFind in the treatment of Osteonecrosis. He is also highly rated in 14 other conditions, according to our data. His top areas of expertise are Osteonecrosis, Osteoarthritis, Osteolysis Syndrome Recessive, Knee Replacement, and Hip Replacement. He is licensed to treat patients in Ohio. Mont is currently accepting new patients.

Vittorio Fusco practices in Alessandria, Italy. Fusco is rated as an Elite expert by MediFind in the treatment of Osteonecrosis. He is also highly rated in 2 other conditions, according to our data. His top areas of expertise are Osteonecrosis, Bone Tumor, Necrosis, and Breast Cancer.

National And Kapodistrian University Of Athens

View All Doctors
What are the support groups for Osteonecrosis?

More information and support for people with osteonecrosis and their families can be found at:

What is the outlook (prognosis) for Osteonecrosis?

How well you do depends on the following:

Outcome may vary from complete healing to permanent damage in the affected bone.

What are the possible complications of Osteonecrosis?

When should I contact a medical professional for Osteonecrosis?

Call your provider if you have symptoms.

How do I prevent Osteonecrosis?

Many cases of osteonecrosis do not have a known cause, so prevention may not be possible. In some cases, you can reduce your risk by doing the following: 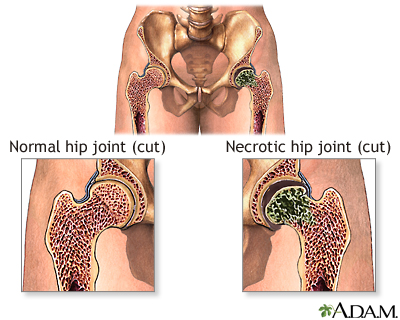 Summary: This is a multicenter, retrospective and prospective, non-controlled post market surveillance study. The objectives of this study are to confirm safety, performance and clinical benefits of the T.E.S.S.® Version 3 Anatomic and Reverse Modular Total shoulder prosthesis and its instrumentation.

Match to trials
Find the right clinical trials for you in under a minute
Get started
Prospective, Multicentre, Open Study Evaluating the Performance and Stability of the AMIStem-P Femoral Stem
Enrollment Status: Active, not recruiting
Publish Date: December 07, 2022
Intervention Type: Device

Summary: This is a Post-Market Surveillance study of AMIStem-P femoral stem prosthesis