What is the definition of Premature Ejaculation?

Premature ejaculation is when a man has an orgasm sooner during intercourse than desired.

What are the causes for Premature Ejaculation?

Premature ejaculation is a common complaint.

It is thought to be caused by psychological factors or physical problems. The condition often improves without treatment.

What are the symptoms for Premature Ejaculation?

The man ejaculates before he would like (prematurely). This may range from before penetration to a point just after penetration. It may leave the couple feeling unsatisfied.

What are the current treatments for Premature Ejaculation?

Practice and relaxation can help you deal with the problem. There are helpful techniques you can try.

The "stop and start" method:

This technique involves sexually stimulating the man until he feels like he is about to reach orgasm. Stop the stimulation for about 30 seconds and then start it again. Repeat this pattern until the man wants to ejaculate. The last time, continue stimulation until the man reaches orgasm.

This technique involves sexually stimulating the man until he recognizes that he is about to ejaculate. At that point, the man or his partner gently squeezes the end of the penis (where the glans meets the shaft) for several seconds. Stop sexual stimulation for about 30 seconds, and then start it again. The person or couple may repeat this pattern until the man wants to ejaculate. The last time, continue stimulation until the man reaches orgasm.

Antidepressants, such as Prozac and other selective serotonin reuptake inhibitors (SSRIs), are often prescribed. These medicines can increase the time it takes to reach ejaculation.

You can apply a local anesthetic cream or spray to the penis to reduce stimulation. Decreased feeling in the penis may delay ejaculation. Condom use also may have this effect for some men.

Other medicines used for erectile dysfunction may help. Some studies show that using a combination of behavioral techniques and medicines may be most effective.

Evaluation by a sex therapist, psychologist, or psychiatrist may help some couples.

What is the outlook (prognosis) for Premature Ejaculation?

In most cases, the man can learn how to control ejaculation. Education and practicing simple techniques are often successful. Chronic premature ejaculation may be a sign of anxiety or depression. A psychiatrist or psychologist can help treat these conditions.

What are the possible complications for Premature Ejaculation?

If a man ejaculates very early, before entering the vagina, it may prevent a couple from getting pregnant.

A continued lack of control over ejaculation may cause one or both partners to feel sexually dissatisfied. It may lead to sexual tension or other problems in the relationship.

When should I contact a medical professional for Premature Ejaculation?

Call your provider if you are having a problem with premature ejaculation and it does not get better using the methods described above.

How do I prevent Premature Ejaculation?

There is no way to prevent this disorder. 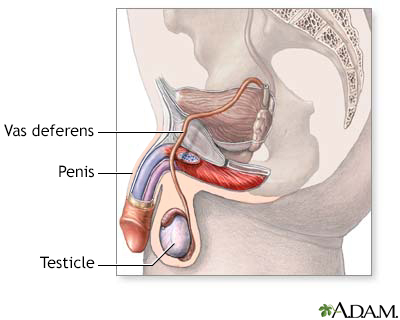