What is the definition of Premenstrual Dysphoric Disorder?

Premenstrual dysphoric disorder (PMDD) is a condition in which a woman has severe depression symptoms, irritability, and tension before menstruation. The symptoms of PMDD are more severe than those seen with premenstrual syndrome (PMS).

PMS refers to a wide range of physical or emotional symptoms that most often occur about 5 to 11 days before a woman starts her monthly menstrual cycle. In most cases, the symptoms stop when, or shortly after, her period begins.

What are the alternative names for Premenstrual Dysphoric Disorder?

What are the causes for Premenstrual Dysphoric Disorder?

The causes of PMS and PMDD have not been found.

Hormone changes that occur during a woman's menstrual cycle may play a role.

PMDD affects a small number of women during the years when they are having menstrual periods.

Many women with this condition have:

Other factors that may play a role include:

What are the symptoms for Premenstrual Dysphoric Disorder?

The symptoms of PMDD are similar to those of PMS. However, they are very often more severe and debilitating. They also include at least one mood-related symptom. Symptoms occur during the week just before menstrual bleeding. They most often get better within a few days after the period starts.

What are the current treatments for Premenstrual Dysphoric Disorder?

A healthy lifestyle is the first step to managing PMDD.

Keep a diary or calendar to record:

Antidepressants may be helpful.

The first option is most often an antidepressant known as a selective serotonin-reuptake inhibitor (SSRI). You can take SSRIs in the second part of your cycle up until your period starts. You may also take it the whole month. Ask your provider.

Cognitive behavioral therapy (CBT) may be used either with or instead of antidepressants. During CBT, you have about 10 visits with a mental health professional over several weeks.

Other treatments that may help include:

Most studies have shown that nutritional supplements, such as vitamin B6, calcium, and magnesium are not helpful in relieving symptoms.

What is the outlook (prognosis) for Premenstrual Dysphoric Disorder?

After proper diagnosis and treatment, most women with PMDD find that their symptoms go away or drop to tolerable levels.

What are the possible complications for Premenstrual Dysphoric Disorder?

PMDD symptoms may be severe enough to interfere with a woman's daily life. Women with depression may have worse symptoms during the second half of their cycle and may need changes in their medicine.

Some women with PMDD have suicidal thoughts. Suicide in women with depression is more likely to occur during the second half of their menstrual cycle.

PMDD may be associated with eating disorders and smoking.

When should I contact a medical professional for Premenstrual Dysphoric Disorder?

Call 911 or a local crisis line right away if you are having thoughts of suicide. 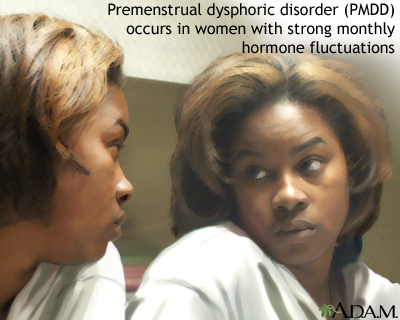 This study investigated the use of ulipristal acetate (UPA)as a treatment for premenstrual dysphoric disorder (PMDD).
This study compared the effectiveness of vitamin B6 versus broad-spectrum micronutrients (vitamins and minerals) in patients with premenstrual syndrome (physical and emotional symptoms that occur in the one to two weeks before a woman's period; PMS).
View All Latest Advances

Clinical Trial
Vulnerable and Resilient Phases During the Menstrual Cycle and Their Influence on Depressive Symptoms and Stress. An Ambulatory Assessment Study on Healthy Women and Women With Depression.
Clinical Trial
The Clinical Application of Tumor Reversion: A Phase I Study of Sertraline (Zoloft) in Combination With Timed-sequential Cytosine Arabinoside (Ara-C) in Adults With Relapsed and Refractory Acute Myeloid Leukemia (AML)
View All Clinical Trials