What is the definition of Radiation Sickness?

Radiation sickness is illness and symptoms resulting from excessive exposure to ionizing radiation.

There are two main types of radiation: nonionizing and ionizing.

What are the alternative names for Radiation Sickness?

Radiation sickness results when humans (or other animals) are exposed to very large doses of ionizing radiation.

Radiation exposure can occur as a single large exposure (acute). Or it can occur as a series of small exposures spread over time (chronic). Exposure may be accidental or intentional (as in radiation therapy for disease treatment).

Radiation sickness is generally associated with acute exposure and has a characteristic set of symptoms that appear in an orderly fashion. Chronic exposure is usually associated with delayed medical problems such as cancer and premature aging, which may happen over a long period of time.

The risk for cancer depends on the dose and begins to build up, even with very low doses. There is no "minimum threshold."

Exposure from x-rays or gamma rays is measured in units of roentgens. For example:

The severity of symptoms and illness (acute radiation sickness) depends on the type and amount of radiation, how long you were exposed, and which part of the body was exposed. Symptoms of radiation sickness may occur right after exposure, or over the next few days, weeks, or months. Bone marrow and the gastrointestinal tract are especially sensitive to radiation injury. Children and babies still in the womb are more likely to be severely injured by radiation.

Children who receive radiation treatments or who are accidentally exposed to radiation will be treated based on their symptoms and their blood cell counts. Frequent blood studies are necessary and require a small puncture through the skin into a vein to obtain blood samples.

What are the causes for Radiation Sickness?

What are the symptoms for Radiation Sickness?

Symptoms of radiation sickness may include:

Your health care provider will advise you how best to treat these symptoms. Medicines may be prescribed to help reduce nausea, vomiting, and pain. Blood transfusions may be given for anemia (low counts of healthy red blood cells). Antibiotics are used to prevent or fight infections.

Giving first aid to radiation victims may expose rescue personnel to radiation unless they are properly protected. Victims must be decontaminated so that they do not cause radiation injury to others.

If symptoms occur during or after medical radiation treatments:

How do I prevent Radiation Sickness? 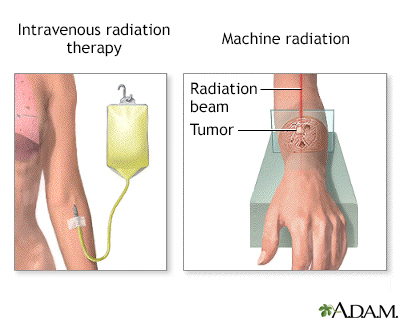 This review of the literature examined the effects of honey in preventing and treating patients with radiotherapy-induced mucositis (ulceration of digestive tract).
This case report describes an 11-year-old boy diagnosed with radiation maculopathy treated with photodynamic therapy (PDT).
View All Latest Advances

Clinical Trial
Study of the Effects of Anticoagulant Interruption Covered by Percutaneous Left Atrial Occlusion in Patients With Chronic Atrial Fibrillation and Radiation Cystitis at Risk of Bleeding
Clinical Trial
Enhancing Brain Lesions After Radiation Therapy: A Comparison of MRI Perfusion and FDG PET/CT to Distinguish Between Radiation Injury and Tumor Progression
View All Clinical Trials