What is the definition of Schizophrenia?

Schizophrenia is a mental disorder that makes it hard to tell the difference between what is real and not real.

It also makes it hard to think clearly, have normal emotional responses, and act normally in social situations.

What are the alternative names for Schizophrenia?

What are the causes for Schizophrenia?

Schizophrenia is a complex illness. Mental health experts are not sure what causes it. Genes may play a role.

Schizophrenia occurs in just as many men as women. It usually begins in the teen or young adult years, but it may begin later in life. In women, it tends to begin slightly later.

Schizophrenia in children usually begins after age 5. Childhood schizophrenia is rare and can be hard to tell apart from other developmental problems.

What are the symptoms for Schizophrenia?

Symptoms usually develop slowly over months or years. The person may have many symptoms, or only a few.

People with schizophrenia may have trouble keeping friends and working. They may also have problems with anxiety, depression, and suicidal thoughts or behaviors.

Early symptoms may include:

As the illness continues, the person may have problems with thinking, emotions, and behavior, including:

What are the current treatments for Schizophrenia?

During an episode of schizophrenia, the person may need to stay in the hospital for safety reasons.

Antipsychotic drugs are the most effective treatment for schizophrenia. They change the balance of chemicals in the brain and can help control symptoms.

These drugs can cause side effects, but many side effects can be managed. Side effects should not prevent the person from getting treated for this serious condition.

Common side effects from antipsychotics may include:

Long-term use of antipsychotics may increase the risk for a movement disorder called tardive dyskinesia. This condition causes repeated movements that the person cannot control. Call the health care provider right away if you think you or your family member may have this condition due to the medicine.

When schizophrenia does not improve with antipsychotics, other medicines may be tried.

Schizophrenia is a life-long illness. Most people with this condition need to stay on antipsychotics for life.

Support therapy may be helpful for many people with schizophrenia. Behavioral techniques, such as social skills training, can help the person function better in social and work situations. Job training and relationship-building classes are also important.

Family members and caregivers are very important during treatment. Therapy can teach important skills, such as:

What is the outlook (prognosis) for Schizophrenia?

Outlook is hard to predict. Most of the time, symptoms improve with medicines. But many people may have trouble functioning. They are at risk for repeated episodes, especially during the early stages of the illness. People with schizophrenia are also at increased risk for suicide.

People with schizophrenia may need housing, job training, and other community support programs. Those with the most severe forms of this disorder may not be able to live alone. They may need to live in group homes or other long-term, structured residences.

Symptoms are very likely to return when medicine is stopped.

What are the possible complications for Schizophrenia?

Having schizophrenia increases the risk for:

When should I contact a medical professional for Schizophrenia?

Call your provider if you (or a family member):

How do I prevent Schizophrenia?

Symptoms may be prevented by taking medicine exactly as the doctor instructed. Symptoms are likely to return if medicine is stopped.

Changing or stopping medicines should only be done by the doctor who prescribed them. 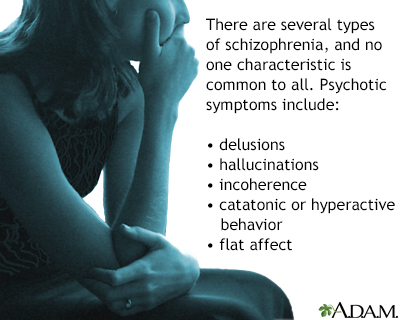