What is the definition of Smallpox?

Smallpox is a serious disease that is easily passed from person to person (contagious). It is caused by a virus.

What are the alternative names for Smallpox?

What are the causes for Smallpox?

Smallpox spreads from one person to another from saliva droplets. It may also be spread from bed sheets and clothing. It is most contagious during the first week of the infection. It may continue to be contagious until the scabs from the rash fall off. The virus can stay alive between 6 and 24 hours.

People were once vaccinated against this disease. However, the disease has been eradicated since 1979. The United States stopped giving the smallpox vaccine in 1972. In 1980, the World Health Organization (WHO) recommended that all countries stop vaccinating for smallpox.

There are two forms of smallpox:

A massive program by the WHO wiped out all known smallpox viruses from the world in the 1970s, except for a few samples saved for government research and presumed bioweapons. Researchers continue to debate whether or not to kill the last remaining samples of the virus, or to preserve it in case there may be some future reason to study it.

You are more likely to develop smallpox if you:

It is unknown how long past vaccinations stay effective. People who received the vaccine many years ago may no longer be fully protected against the virus.

THE RISK OF TERRORISM

What are the symptoms for Smallpox?

Symptoms most often occur about 12 to 14 days after you have been infected with the virus. They may include:

What are the current treatments for Smallpox?

The smallpox vaccine may prevent illness or lessen symptoms if it is given within 1 to 4 days after a person is exposed to the disease. Once symptoms have started, treatment is limited.

In July 2013, 59,000 courses of the antiviral drug tecovirimat was delivered by SIGA Technologies to the United States government's Strategic National Stockpile for use in a possible bioterrorism incident. SIGA filed for bankruptcy protection in 2014.

Antibiotics may be given for infections that occur in people who have smallpox. Taking antibodies against a disease similar to smallpox (vaccinia immune globulin) may help shorten the duration of the disease.

People who have been diagnosed with smallpox and people they have been in close contact with need to be isolated right away. They will need to receive the vaccine and be watched closely.

What is the outlook (prognosis) for Smallpox?

In the past, this was a major illness. The risk of death was as high as 30%.

What are the possible complications for Smallpox?

When should I contact a medical professional for Smallpox?

How do I prevent Smallpox?

Many people were vaccinated against smallpox in the past. The vaccine is no longer given to the general public. If the vaccine needs to be given to control an outbreak, it can have a small risk of complications. Currently, only military personnel, health care workers, and emergency responders may receive the vaccine. 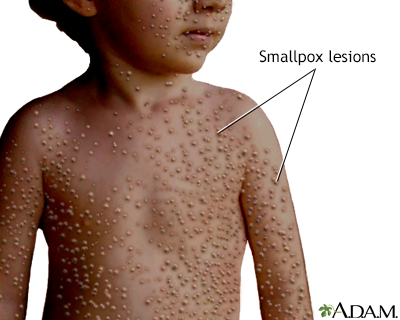 Latest Advance
Study
The study researched the effect of a modified vaccinia ankara for protection against smallpox.
View All Latest Research