What is the definition of Tricuspid Atresia?

Tricuspid atresia is a type of heart disease that is present at birth (congenital heart disease), in which the tricuspid heart valve is missing or abnormally developed. The defect blocks blood flow from the right atrium to the right ventricle. Other heart or vessel defects are usually present at the same time.

Save information for later
Sign Up
What are the alternative names for Tricuspid Atresia?

What are the causes of Tricuspid Atresia?

Tricuspid atresia is an uncommon form of congenital heart disease. It affects about 5 in every 100,000 live births. One in five people with this condition will also have other heart problems.

Instead, the blood passes through a hole between the right and left atrium. In the left atrium, it mixes with oxygen-rich blood returning from the lungs. This mix of oxygen-rich and oxygen-poor blood is then pumped out into the body from the left ventricle. This causes the oxygen level in the blood to be lower than normal.

In people with tricuspid atresia, the lungs receive blood either through a hole between the right and left ventricles (described above), or through maintenance of a fetal vessel called the ductus arteriosus. The ductus arteriosus connects the pulmonary artery (artery to the lungs) to the aorta (main artery to the body). It is present when a baby is born, but normally closes by itself shortly after birth.

What are the symptoms of Tricuspid Atresia?

Not sure about your diagnosis?
Check Your Symptoms
What are the current treatments for Tricuspid Atresia?

Once the diagnosis is made, the baby will often be admitted to the neonatal intensive care unit (NICU). A medicine called prostaglandin E1 may be used to keep the ductus arteriosis open (patent) so that blood can circulate to the lungs.

Generally, patients with this condition require surgery. If the heart is unable to pump enough blood out to the lungs and rest of the body, the first surgery most often takes place within the first few days of life. In this procedure, an artificial shunt is inserted to keep blood flowing to the lungs. In some cases, this first surgery is not needed.

Afterward, the baby goes home in most cases. The child will need to take one or more daily medicines and be closely followed by a pediatric cardiologist. This doctor will decide when the second stage of surgery should be done.

The next stage of surgery is called the Glenn shunt or hemi-Fontan procedure. This procedure connects half of the veins carrying oxygen-poor blood from the upper half of the body directly to the pulmonary artery. The surgery is most often done when the child is between 4 to 6 months old.

During stage I and II, the child may still look blue (cyanotic).

Stage III, the final step, is called the Fontan procedure. The rest of the veins carrying oxygen-poor blood from the body are connected directly to the pulmonary artery leading to the lungs. The left ventricle now only has to pump to the body, not the lungs. This surgery is usually performed when the child is 18 months to 3 years old. After this final step, the baby's skin is no longer blue.

Sachin Talwar practices in New Delhi, India. Talwar is rated as an Elite expert by MediFind in the treatment of Tricuspid Atresia. He is also highly rated in 41 other conditions, according to our data. His top areas of expertise are Transposition of the Great Arteries, Ventricular Septal Defects, Total Anomalous Pulmonary Venous Return, and Tetralogy of Fallot.

Harold Burkhart is a Thoracic Surgeon in Oklahoma City, Oklahoma. Burkhart has been practicing medicine for over 30 years and is rated as a Distinguished expert by MediFind in the treatment of Tricuspid Atresia. He is also highly rated in 31 other conditions, according to our data. His top areas of expertise are Hypoplastic Left Heart Syndrome, Congenital Heart Disease CHD, Atrioventricular Septal Defect, and Pulmonary Atresia. He is licensed to treat patients in Iowa, Oklahoma, Minnesota, and Wisconsin. Burkhart is currently accepting new patients.

Benjamin Frischhertz is a Cardiologist and a Pediatrics expert in Nashville, Tennessee. Frischhertz has been practicing medicine for over 16 years and is rated as a Distinguished expert by MediFind in the treatment of Tricuspid Atresia. He is also highly rated in 11 other conditions, according to our data. His top areas of expertise are Tricuspid Atresia, Atrioventricular Septal Defect, Endocardial Cushion Defect, and Partial Atrioventricular Canal. He is licensed to treat patients in Tennessee. Frischhertz is currently accepting new patients.

View Profile
View All Doctors
What is the outlook (prognosis) for Tricuspid Atresia?

In most cases, surgery will improve the condition.

What are the possible complications of Tricuspid Atresia?

When should I contact a medical professional for Tricuspid Atresia?

Contact your health care provider right away if your infant has:

How do I prevent Tricuspid Atresia?

There is no known way to prevent tricuspid atresia. 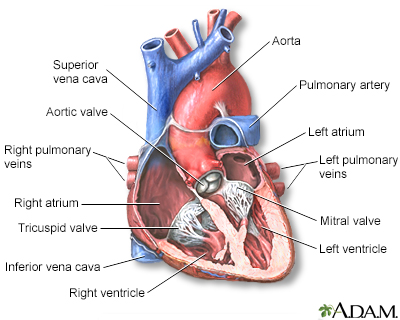 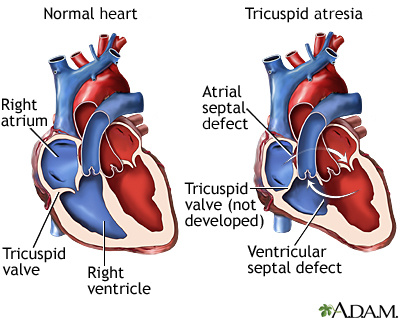